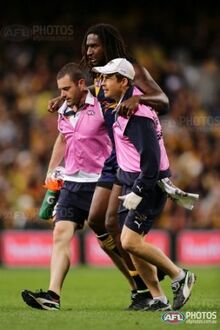 Coming off a surprise Grand Final appearance, West Coast started the season as one of the premiership fancies but struggled throughout the year to live up to that billing, particularly early on in the season when the side found winning away from Subiaco difficult. After drifting around the lower reaches of the top eight for most of the season, the Eagles appeared to have clicked into form in the final three rounds when they defeated fellow finalists GWS Giants, Hawthorn and Adelaide in succession to earn a home elimination final. Unfortunately they lost important ruckman Nic Naitanui to a serious knee injury midway through that run, and failed to fire a shot in their finals appearance, falling heavily to eventual premiers Western Bulldogs to wrap up what was an underwhelming year.

While only a handful of players managed to reach their 2015 form, Luke Shuey turned in the best season of his career to date, the midfielder winning his first John Worsfold Medal and only just missing out on a maiden All-Australian berth. Josh Kennedy won his second consecutive Coleman Medal after booting a career-high 82 goals for the year, and was joined in the All-Australian team by defender Jeremy McGovern who solidified his reputation as one of the best intercept marks in the league. Key defender Tom Barrass stamped himself as a player of the future, forming an imposing partnership with McGovern late in the year. Unfortunately key midfield recruits Lewis Jetta and Jack Redden both struggled for form and spent extended periods in the reserves, along with former club champion Eric MacKenzie who fell behind Barrass in the pecking order on his return from a knee injury. The playing list was relatively healthy throughout the year with Naitanui, who missed a stretch midyear after Achilles surgery before rupturing his ACL in the penultimate round, and midfielder Dom Sheed the only experienced players to miss lengthy periods.

Rookie of the Year: Tom Barrass

Indigenous Round
Add a photo to this gallery

Retrieved from "https://eaglepedia.fandom.com/wiki/2016_season?oldid=28729"
Community content is available under CC-BY-SA unless otherwise noted.