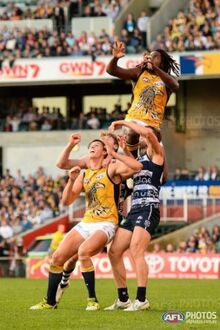 West Coast's hopes of a first finals appearance since 2012 took a heavy hit during the pre-season when reigning club champion Eric MacKenzie suffered a serious knee injury, and looked extremely remote when his replacement Mitch Brown suffered the same fate during the opening quarter of Round 1. However, following those early setbacks and a poor start to the year, Adam Simpson's Eagles clicked into gear, winning 11 of 12 games through the middle of the season to raise the side's hopes of not only participating in the finals, but going deep into September. Despite a couple of hiccups late in the season, West Coast held on to second spot on the ladder to earn a home qualifying final, then beat reigning premiers Hawthorn to book a home preliminary final for the first time in a decade. After overcoming a plucky North Melbourne the Eagles progressed to a Grand Final berth that had seemed almost impossible at the start of the year, but that was the end of the fairytale as the inexperienced side was overwhelmed by Hawthorn on the big day.

The Eagles' massive improvement from 2014 was built on career-best seasons by a number of players, most significantly spearhead Josh Kennedy who won the Coleman Medal with 80 goals. Kennedy was joined in the All-Australian side by midfielders Andrew Gaff and Matt Priddis, with Gaff winning the John Worsfold Medal and Priddis following on from his 2014 Brownlow Medal with a second-placed finish in the 2015 count and running second to Gaff in the club's best and fairest. Will Schofield and Jeremy McGovern were tremendous in key defensive posts in the absence of MacKenzie and Brown, and Brad Sheppard and Sharrod Wellingham also became unlikely heroes down back after previously inconsistent West Coast careers. A couple of young midfielders in Dom Sheed and Liam Duggan also showed great promise, with Sheed finishing third in the Rising Star award and Duggan playing 12 impressive games in his rookie season.

Rookie of the Year: Dom Sheed

Indigenous (round 9)
Add a photo to this gallery

Retrieved from "https://eaglepedia.fandom.com/wiki/2015_season?oldid=28760"
Community content is available under CC-BY-SA unless otherwise noted.