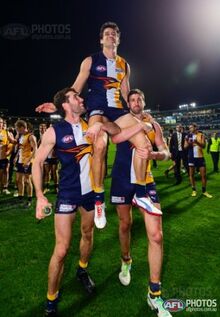 Touted in the pre-season as a premiership fancy, West Coast's 2013 season never got going, with the side struggling from round 1 and having a horror final three weeks to finish a lowly 13th. Constant injuries didn't help, with sensational ruckman Nic Naitanui, prized recruit Sharrod Wellingham, veteran Daniel Kerr and important defenders Beau Waters and Shannon Hurn among those who missed large chunks of the season. At the end of the year, long-time coach John Worsfold announced his retirement due to burnout, ending a remarkable 12-year stay in the top job.

On the positive side, Eric MacKenzie continued his development into an elite key back, Josh Kennedy looked set for a Coleman Medal until that disastrous last few weeks, and hard-working midfielder Matt Priddis had a career-best year and took home the Club Champion award, renamed the John Worsfold Medal in honour of the retiring coach and two-time premiership captain. A few youngsters also gave some hope for the future, including ruckman Scott Lycett, inside midfielder Mark Hutchings and former Saint Jamie Cripps.

Rookie of the Year: Scott Lycett

Retrieved from "https://eaglepedia.fandom.com/wiki/2013_season?oldid=26394"
Community content is available under CC-BY-SA unless otherwise noted.