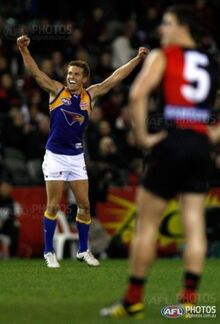 West Coast started the season full of positivity after a run of wins to close out 2009, but the glow soon evaporated when the side lost their first three games. They improved to 3-5 but then the wheels fell off completely, the club losing 13 of the next 14 games to plunge to the first wooden spoon in its history. Injuries didn't help, with Darren Glass, Daniel Kerr and young gun Luke Shuey among those to have extended stints on the sidelines.

Amongst the carnage, Mark LeCras followed up on his break-out 2009 season by topping the clubs goalscoring for the second straight year and winning an All-Australian jumper for the first time. LeCras' season featured a memorable 12-goal effort against Essendon in Melbourne in the Eagles' only win in the latter half of the year. Ruck pair Dean Cox and Nic Naitanui showed they would be more than a handful for opposition clubs for some time, and Beau Waters showed what he was capable when his body allowed him to string games together.

Rookie of the Year: Nic Naitanui

Clash
Add a photo to this gallery

Retrieved from "https://eaglepedia.fandom.com/wiki/2010_season?oldid=28964"
Community content is available under CC-BY-SA unless otherwise noted.