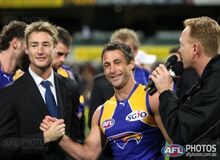 After the terrible 2008 season, not much was expected of West Coast and they started slowly, winning just a handful of games and hovering a couple of games out of the eight before a poor stretch of games mid-season in which they lost nine of ten games sent the side crashing to the lower reaches of the ladder. With just over a month to go and a potential priority draft pick in the offing, the Eagles suddenly found their mojo, winning four of the final five games to end the season full of momentum.

Impressive forward Mark LeCras had a career-best year, kicking 58 goals and unlucky to miss out on All-Australian selection. Captain Darren Glass continued to lead from the front (and the back), holding up the defence and winning his second Club Champion award. Veterans Andrew Embley and Adam Selwood also performed well, as did young backman Shannon Hurn. Second-year players Chris Masten, Brad Ebert and Scott Selwood gave signs of a rosy future, as did the first few games of incredibly raw but exciting ruckman Nic Naitanui.

Rookie of the Year: Chris Masten

Away
Add a photo to this gallery

Retrieved from "https://eaglepedia.fandom.com/wiki/2009_season?oldid=28962"
Community content is available under CC-BY-SA unless otherwise noted.