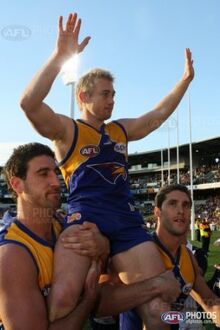 The fall from grace of the 2006 premiers was swift and cruel. West Coast may have been the first team to ever lose two Brownlow Medalists in the same off-season, with captain Chris Judd going back to Victoria at the end of 2007 and his predecessor Ben Cousins deregistered by the AFL following his much-publicised substance abuse issues.

After a season-opening win, West Coast lost their next seven games to plummet to the lower rungs of the ladder. They remained there for the rest of the season, winning just four games to finish second-last, to that point the worst result in the club's history. Along the way they suffered their biggest ever defeat at Subiaco, a 135-point thrashing by Geelong, and another 100 point demolition at the hands of Collingwood which remains the club's biggest loss at the MCG.

On the positive side, Dean Cox continued to show why he is probably the greatest ruckman of the modern era, winning the Club Champion award in a canter. Fellow veterans Andrew Embley and Darren Glass, the latter taking on the captaincy following Judd's departure, also stood up among the carnage. Undersized forward Ben McKinley led the club's goalkicking in his first season as a regular member of the senior side, highlighted by a seven-goal haul against Essendon.

Rookie of the Year: Ben McKinley

Clash
Add a photo to this gallery

Retrieved from "https://eaglepedia.fandom.com/wiki/2008_season?oldid=31724"
Community content is available under CC-BY-SA unless otherwise noted.