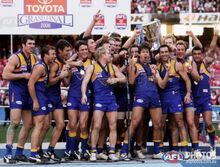 Looking to go one better after the previous year's heartbreaking grand final loss, the 2006 season got off to a horrible start when Ben Cousins was stripped of the captaincy following a bizarre 'booze-bus' incident in the pre-season. With fellow Brownlow Medalist Chris Judd installed as captain, albeit a little reluctantly, West Coast burst out of the blocks, winning their first five games. After making a habit of reeling in big deficits (none more so than the classic match in Geelong where West Coast came back from 57 points down to win by 3), the Eagles finished the home and away season as minor premiers.

Earning a home final against arch-rivals Sydney, West Coast went down by a single point in a memorable encounter. Facing sudden death, the Eagles easily dispatched Western Bulldogs in a home semi-final before travelling to Adelaide for a prelim against the Crows. West Coast once again snatched victory from the jaws of defeat, earning a rematch against the Swans. In one of the classic grand finals of the modern era, West Coast got out to a handy lead and were able to hold off a fast-finishing Sydney to win their third flag. Midfielder Andrew Embley won the Norm Smith Medal for his efforts, often running into the defensive 50 in the final stanza to take a saving mark.

As usual West Coast's success was driven by its dominant midfield, led by new captain Judd, his predecessor Cousins, Daniel Kerr, Chad Fletcher, Embley and ruckman Dean Cox. Full forward Quinten Lynch kicked more goals in a season than any Eagle since Scott Cummings' Coleman Medal year, and full back Darren Glass held sway in the back half.

Rookie of the Year: Jaymie Graham

Heritage Round (round 16)
Add a photo to this gallery

Retrieved from "https://eaglepedia.fandom.com/wiki/2006_season?oldid=31587"
Community content is available under CC-BY-SA unless otherwise noted.