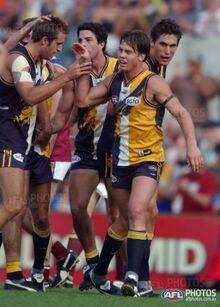 Despite the club's worst year in 2001, there was a cautiously optimistic mood leading into the 2002 season thanks to the return of favourite son John Worsfold to take the coaching reins and a promising group of youngsters headed by Rising Star runner-up Daniel Kerr and top-three draft pick Chris Judd.

In the first half of the season West Coast hovered among the lower half of the top eight, proving almost unbeatable at home but struggling away from Subiaco. They looked set to a return to the finals for the first time in three years but the young side tired late in the season and dropped out of the eight after a heavy loss to reigning premiers Brisbane at the Gabba. Entering the final round they faced a tough test, needing to beat the strong Kangaroos side in Canberra. They passed, scoring a surprise 17 point win to book an elimination final against Essendon. Beaten but not disgraced in that game, the outlook for the future looked rosy.

Taking on the captaincy role solo for the first time after Dean Kemp's retirement, Ben Cousins won his second straight Club Champion award and All-Australian selection for a fourth straight year. Judd was a revelation in his rookie season, finishing in the top three in the Club Champion count and narrowly being pipped for the AFL's Rising Star award by St Kilda's Nick Riewoldt. He, Cousins and Kerr formed the nucleus of a dynamic young midfield, which they would do for several years to come.

Rookie of the Year: Chris Judd

Retrieved from "https://eaglepedia.fandom.com/wiki/2002_season?oldid=25153"
Community content is available under CC-BY-SA unless otherwise noted.