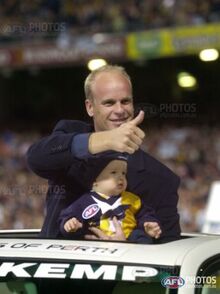 Following on from the club's first finals absence in a decade, West Coast gutted the playing list, bringing in a collection of recycled players as a host of premiership stars departed either through retirement or trades. With skipper Guy McKenna among the retirees, the Eagles elected to appoint co-captains for the first time, with the duties to be shared between popular veteran Dean Kemp and talented young tyro Ben Cousins.

The Eagles started the season reasonably, winning back to back games against St Kilda and Fremantle to sit just outside the eight after the first month. It went downhill badly from there though, with the club losing 12 of the next 13 to sit just above Fremantle at the foot of the ladder. A couple of late wins lifted the side to 14th, but did little to mask a horror season which ultimately cost coach Ken Judge his job. A series of ugly losses included two 100-point plus shellackings and 10 games with losing margins of more than 60 points. Injuries played their part, with a host of players suffering serious injuries during the season, including Kemp who retired after managing just eight games.

The other co-captain, Cousins, played almost a lone hand throughout the season, winning the Club Champion award in a landslide as well as earning All-Australian selection. Rookie midfielder Daniel Kerr was another rare shining light, unlucky to miss out on the league's Rising Star award. Judge's former Hawthorn charges Michael Collica and Richard Taylor were probably the best of the recruited players.

Rookie of the Year: Daniel Kerr

Retrieved from "https://eaglepedia.fandom.com/wiki/2001_season?oldid=19402"
Community content is available under CC-BY-SA unless otherwise noted.