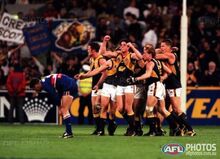 West Coast limped into the 1999 season without a host of their premiership stars - Chris Waterman announced his retirement before the start of the season and Brett Heady lasted just one match, following on from captain John Worsfold and Tony Evans calling it quits after 1998. Added to that was the injury-enforced absences of Chris Lewis and Chris Mainwaring, the latter managing just five games which was five more than Lewis.

Despite the loss of personnel the Eagles stormed out of the gates, winning their first six games and 11 of the first 14 to sit on top of the ladder with a couple of months to go before finals. They then won just one more match during a horror run that saw them lose to Brisbane by a record 100 points and, even more disturbingly, lose a Derby for the first time ever. As they limped into the finals in fifth spot, long-time coach Mick Malthouse announced that he would not re-sign for 2000 and would be returning to Victoria with his family. West Coast then found some form in the first week of the finals to beat the Bulldogs, but the vagaries of the final 8 system saw them drawn to play their semi-final against Carlton in Melbourne despite the Blues having finished below the Eagles and having been soundly beaten in their qualifying final. Carlton won comfortably and brought down the curtain on Malthouse's long and successful stint as West Coast coach.

Decorated defender Guy McKenna took over the captaincy from Worsfold and led from the front, winning the Club Champion award in a countback from young midfielder Michael Braun. Another young mid, Ben Cousins finished just a vote back from McKenna and Braun in third and also made the All-Australian side for the second straight year. Burly sharpshooter Scott Cummings, who had arrived from Port Adelaide in a trade the previous October, kicked 95 goals to become the first Eagle to win the Coleman Medal, although he was controversially left out of the AA-side.

Rookie of the Year: Laurie Bellotti

Retrieved from "https://eaglepedia.fandom.com/wiki/1999_season?oldid=14426"
Community content is available under CC-BY-SA unless otherwise noted.