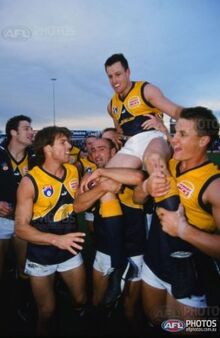 After three successive early finals exits following the 1994 flag, West Coast entered 1998 looking to once again stamp their authority on the AFL. The season started poorly with the Eagles losing five of the first seven games to drop as low as 12th, before a six-game winning streak saw them climb into the top 3. They sealed their finals spot with a few weeks to go, but lost their final two games to finish 7th and book a sudden-death final at the MCG against premiership hopefuls Western Bulldogs. In a controversial decision, inspirational captain John Worsfold was left out of the side on advice from the medical team. The Bulldogs demolished West Coast and Worsfold never played again.

West Coast were well served throughout the season by a combination of premiership veterans and young guns. One of the former, full-back Ashley McIntosh, won his first Club Champion award in a stellar season in which he also earned All-Australian selection. Guy McKenna and Chris Waterman were other senior players to star during the season, while at the other end of the spectrum Ben Cousins made the All-Australian side (for the first of many times) in just his third season and Michael Braun, Chad Morrison and Phil Read also showed plenty of promise. Fraser Gehrig established himself at full-forward following the retirement of Peter Sumich, leading the club with 42 goals.

Rookie of the Year: Phil Read

Retrieved from "https://eaglepedia.fandom.com/wiki/1998_season?oldid=19659"
Community content is available under CC-BY-SA unless otherwise noted.