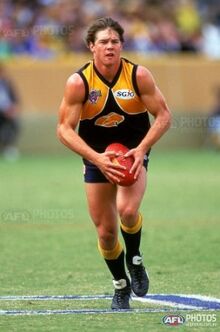 After their premiership defence fizzled out in 1995, West Coast looked to reassert themselves as a premiership threat in 1996. That task started poorly with the side losing four of its first five games, before finding their rhythm with a 106-point demolition of the Demons which sparked an eleven-game winning streak. Overcoming the loss of several key personnel, including captain John Worsfold and champion defender Glen Jakovich to serious knee injuries, the Eagles qualified for the finals in fourth spot. After easily accounting for Carlton at home, controversy reigned when West Coast was forced to play a "home" semi-final against Essendon in Victoria despite the sixth-placed Bombers having lost their qualifying final - the AFL's contractual arrangements required a final to be played at the MCG every week, but West Coast and the Brisbane Bears had qualified to host the semi-finals. The Bombers smashed the Eagles in front of a fanatical pro-Victorian crowd to end the side's season.

Defensive midfielder Drew Banfield was a surprise winner of the Club Champion award, just pipping veteran wingman Chris Mainwaring and defender Guy McKenna in a close finish. Mainwaring was named on a wing in the All-Australian side, and was joined by Peter Matera (who had reinvented himself as a running half-back) and Mitchell White who also won the club's goalkicking for the first time. With veterans such as Worsfold, Jakovich, Brett Heady and Chris Lewis missing for lengthy periods, opportunities arose for youngsters and a handful stood out, notably Ben Cousins who won the league's Rising Star award playing as a small forward, Chad Morrison and Andrew Donnelly.

Rookie of the Year: Andrew Donnelly

Retrieved from "https://eaglepedia.fandom.com/wiki/1996_season?oldid=28679"
Community content is available under CC-BY-SA unless otherwise noted.