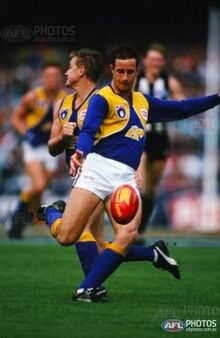 West Coast got its premiership defence off to a solid start by winning the first three games, but suffered losses regularly thereafter and struggled to build momentum. The Eagles hovered around the middle of the top eight for most of the year but failed to earn a home final, finishing fifth and facing a fired-up Bombers outfit in Melbourne in the first week of the finals. After being comfortably defeated, West Coast got a second chance but once again had to travel to Melbourne and once again suffered a sizeable loss, this time to North Melbourne which brought their season to a premature end.

Star defender Glen Jakovich was again the standout, winning a third straight Club Champion award and a second straight All-Australian Guernsey. Others from the 1994 premiership side who performed well included Dean Kemp, Guy McKenna and Peter Matera, while the new faces included a young Fraser Gehrig who impressed as an athletic and versatile tall.

Rookie of the Year: Fraser Gehrig

Retrieved from "https://eaglepedia.fandom.com/wiki/1995_season?oldid=28571"
Community content is available under CC-BY-SA unless otherwise noted.