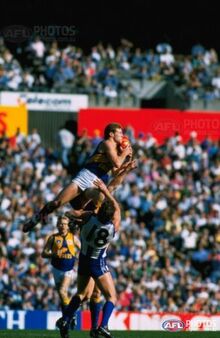 Fresh from their historic premiership win, West Coast started the 1993 season strongly and spent much of the early months in the upper reaches of the ladder. A few unfortunate losses saw them slip, and when Essendon won a thriller at the MCG the Eagles worryingly sat outside the top six with just six rounds to play. Four straight wins saw them climb back into second, but losses to Footscray and Geelong threatened to knock them out of the finals race altogether. West Coast narrowly qualified for the finals ahead of Geelong on percentage, and then upset North Melbourne to keep their premiership defence alive. It was not to last, however, with a semi-final loss to eventual premiers Essendon ending the Eagles' season.

For the first time two players could not be split for the Club Champion award, with young defender Glen Jakovich and unassuming midfielder Don Pyke sharing the honour. Other premiership stars to follow up with strong seasons included Peter Matera and Guy McKenna, both of whom were named in the All-Australian side, and Ashley McIntosh who proved himself extremely useful at both ends of the ground. Spearhead Peter Sumich had another good year in front of goal, with his final tally of 76 including a season-opening 7 goal effort against the Bombers and a handful of half-dozen hauls. Top draft pick Drew Banfield impressed in limited appearances, as did second-year utility Matt Clape. On the downside, popular Craig Turley announced a surprise retirement early in the season (although he would return in 1994).

Rookie of the Year: Drew Banfield

Retrieved from "https://eaglepedia.fandom.com/wiki/1993_season?oldid=16082"
Community content is available under CC-BY-SA unless otherwise noted.