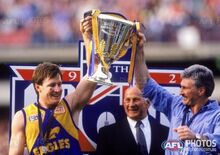 After their impressive run towards the 1991 premiership ended at the hands of a more experienced Hawthorn on Grand Final day, West Coast came out of the blocks slowly in 1992. 7 rounds in, the Eagles sat well back in 10th spot with just 2 wins and a draw following an unsuccessful trip to Hobart to play Fitzroy. West Coast then found their feet, winning 7 of the next 8 games to entrench themselves in the top six. Engaged in a battle for a top two spot with Geelong and Footscray for the last few rounds, a poor loss to the Bulldogs in Melbourne in the second-last round saw them slip to fourth and a tough assignment against the Hawks in a sudden-death final.

The Eagles got their revenge on Hawthorn, knocking the reigning premiers out of the finals in an exciting shootout at Subiaco, and earned a double chance the following week after St Kilda upset Collingwood in the other elimination final. After knocking off Geelong at the MCG, the Eagles were heading to their second straight grand final, and had a week off while the Dogs and Cats battled it out for the opportunity to face them. Geelong won their way through, and in a hard-fought contest West Coast took the lead in the third quarter and stormed home to win an historic first flag, the first time the premiership cup had left Victoria.

Hard-working midfielder Dean Kemp was the standout throughout the season, the blonde boy from Kalgoorlie winning the Club Champion award comfortably and earning selection in the All-Australian side. He had plenty of help through the middle, with Chris Mainwaring, Peter Matera and Craig Turley all having strong seasons. Matera's year was not quite up to the standard of his outstanding 1991, but he more than made up for it with a superb effort in the Grand Final. Full-forward Peter Sumich once again easily topped the goalkicking, with his 82 goals the fourth highest across the league and including a haul of 11 against Essendon and a couple of bags of 8.

Rookie of the Year: Matt Clape

Retrieved from "https://eaglepedia.fandom.com/wiki/1992_season?oldid=26282"
Community content is available under CC-BY-SA unless otherwise noted.