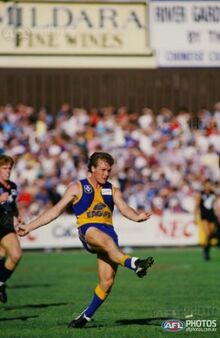 After their history-making inaugural season, West Coast (with new coach John Todd at the helm) started 1988 strongly, winning their first three games to hit the top of the ladder. After a mid-season slump during which they lost five games in a row, the Eagles fought their way back into the top five, finishing fourth at the end of the home-and-away season and earning a place in their first-ever finals series. The elimination final ended in heartbreak as Melbourne won by just 2 points, but it marked a successful year for the young side.

Youngsters were chiefly responsible for the side's strong season, with tough midfielderJohn Worsfold having a breakout year to win the Club Champion award, ably assisted by Chris Mainwaring and rookie defender Guy McKenna. Some experienced VFL players lent solid support including former Footscray key position player Murray Rance who spent most of the year in defence, and skipper Ross Glendinning who spent the season at full-forward and finished with 73 goals before announcing his retirement at the end of the year.

Rookie of the Year: Guy McKenna

Retrieved from "https://eaglepedia.fandom.com/wiki/1988_season?oldid=31001"
Community content is available under CC-BY-SA unless otherwise noted.